Environment of the Study Area

The three counties of the Lower Chickahominy watershed boast some of the most valuable and unique natural resources in Virginia.  Healthy streams run through forested lands and open spaces that are home to the native flora and fauna of the tidal fresh zone of coastal Virginia.

The land cover in the study area is characteristic of a rural area experiencing suburban development pressure in Virginia's coastal plain.  The majority of land in the study area is covered by small and large blocks of forest.  The presence of active agriculture across the landscape is reflected in land areas classified as pasture or cropland.  Residential and business development is reflected in impervious, turf/grass, and disturbed land areas. 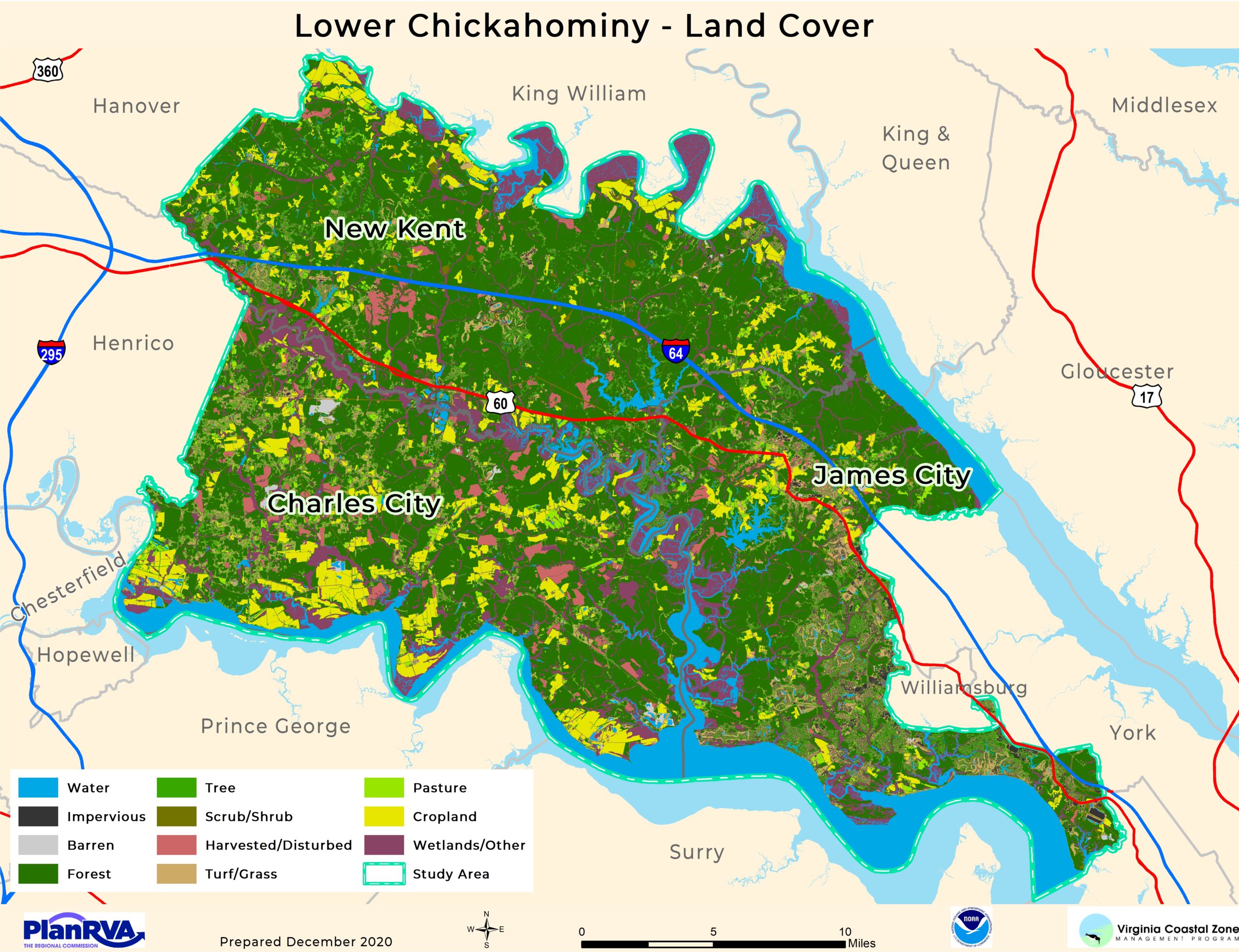 What is the riparian zone?

Riparian zones are the transitional areas between land and water, including the margins of streams, rivers, lakes, and wetlands. They are rich in biodiversity and play an important role in protecting water quality and stream ecosystem health. Riparian zones containing a variety of native woody and herbaceous plant species provide habitat and food for aquatic organisms, as well as terrestrial animals. Root structure in a healthy, dense mix of riparian vegetation fortifies streambanks, which helps control erosion caused by extreme flow velocities and flooding. Riparian vegetation functions as a large sponge that reduces overland surface flow and absorbs pollutants caught up in stormwater runoff. In addition, tree canopy in riparian zones provides shade, which helps maintain cooler water temperatures and higher dissolved oxygen levels. 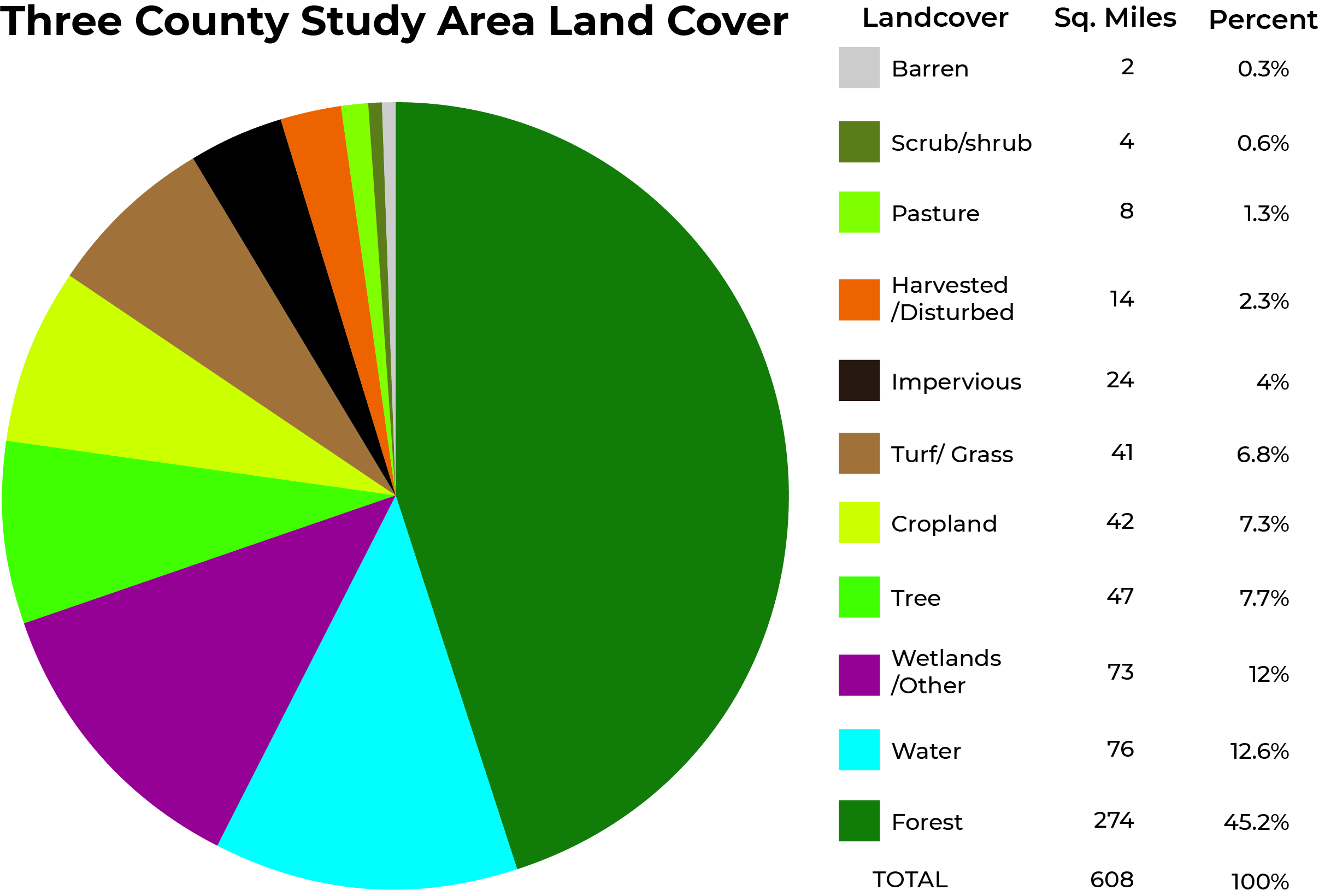 Virginia's Healthy Waters initiative is a collaborative program between state agencies and the VCU Center for Environmental Studies.  The program uses ecological stream assessments and water quality data to classify streams, creeks, and rivers across Virginia according to their degree of health.   The goal of the program is to identify healthy streams and encourage the protection of stream health before pollution or other human impacts degrade it.  In determining stream health, scientists and data analysts consider the following elements: 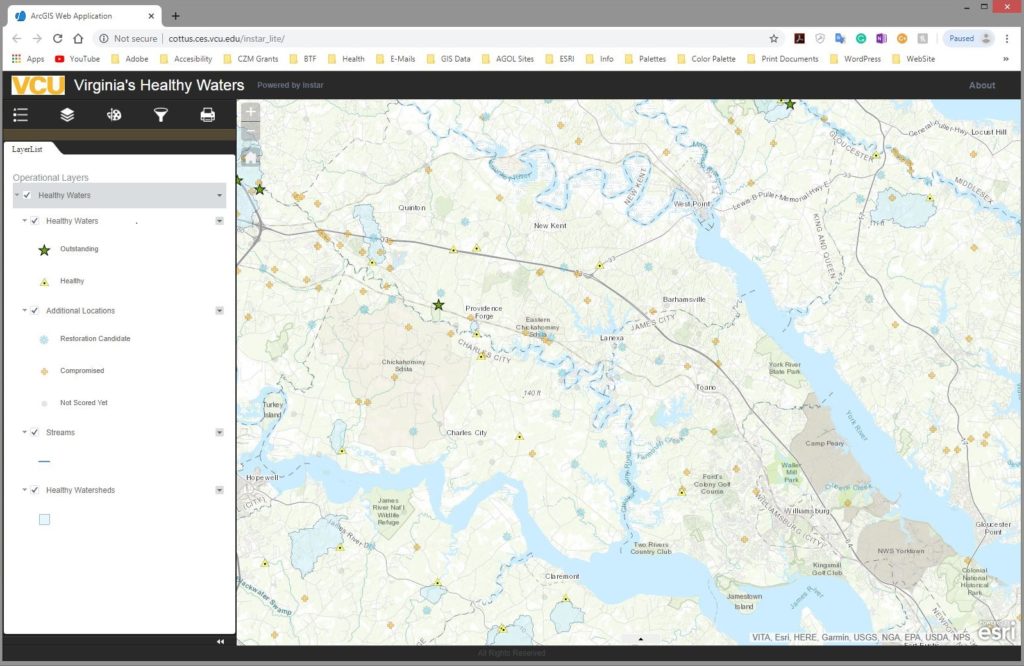 The Lower Chickahominy study area has a variety of habitats for both common and rare native wildlife, including endangered species.  Bald eagles and peregrine falcons roam the sky while prehistoric sturgeon glide through the water.  This naturally diverse and unique wildlife population exists because of the valuable habitats that span the landscape and waterways of the Lower Chickahominy.

To better understand how valuable ecological areas are spread across Virginia, the Virginia Coastal Zone Management Program worked with state resource agencies to create a model data set for use as a mapping tool called the Virginia Ecological Value Assessment, or VEVA.  The collaboration included scientists and data analysts from the Virginia Departments of Conservation and Recreation Division of Natural Heritage, Game and Inland Fisheries, and Environmental Quality as well as the VCU Center for Environmental Studies and the VIMS Center for Coastal Resources Management.  The VEVA combines scientific data and best professional judgment to rank land- and water-based areas for their ecological value. Areas in the VEVA are ranked 1-5 based on their ecological value and conservation priority; a score of 5 is highest, also referred to as “Outstanding.”  The Lower Chickahominy study area has a greater percentage of its land and water area recognized in the VEVA as having either Outstanding or Very High ecological value compared to the entire Coastal Zone of Virginia; 39% compared to 34%.  Therefore, the three counties of the Lower Chickahominy represent a concentration of ecologically valuable land and water habitat. 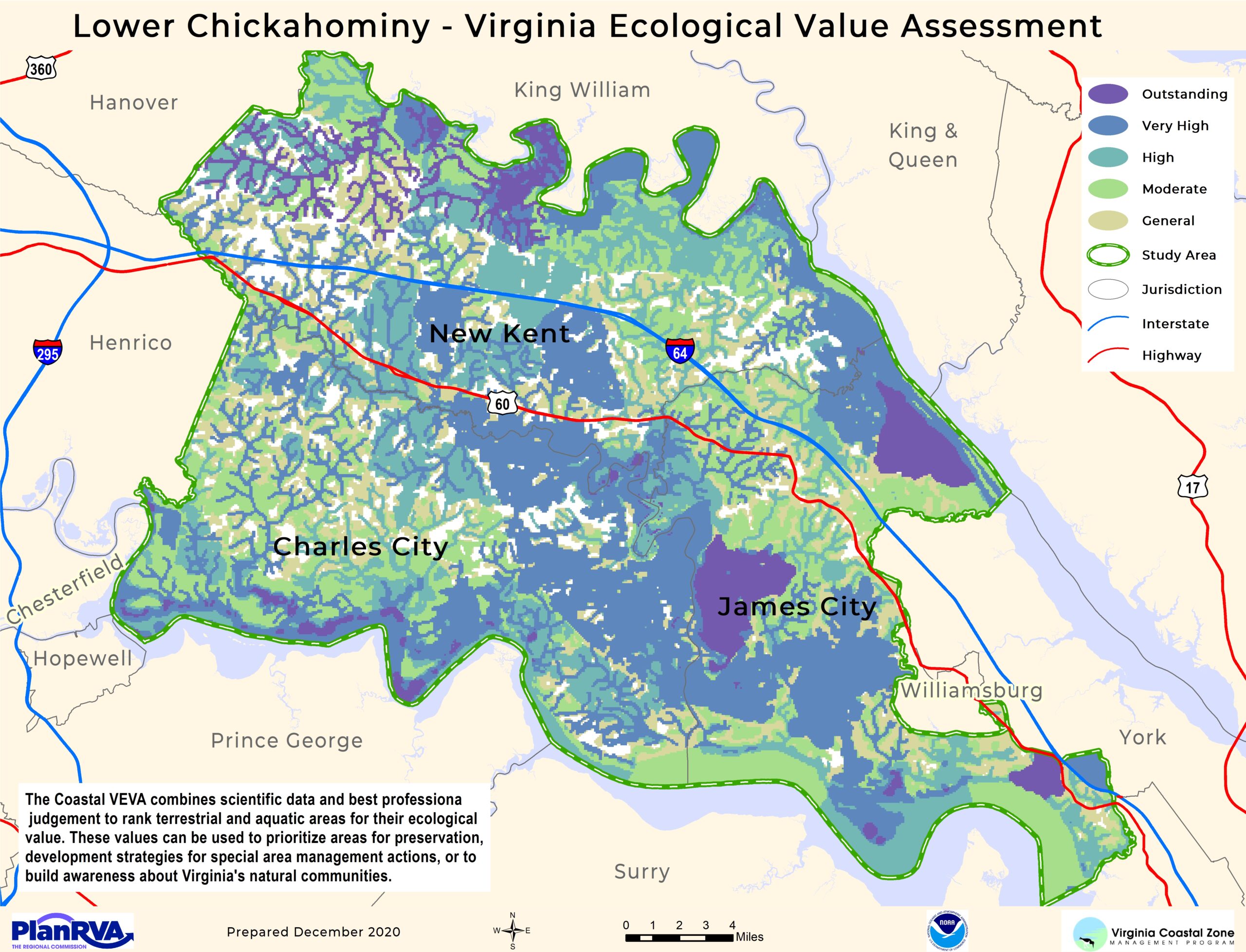 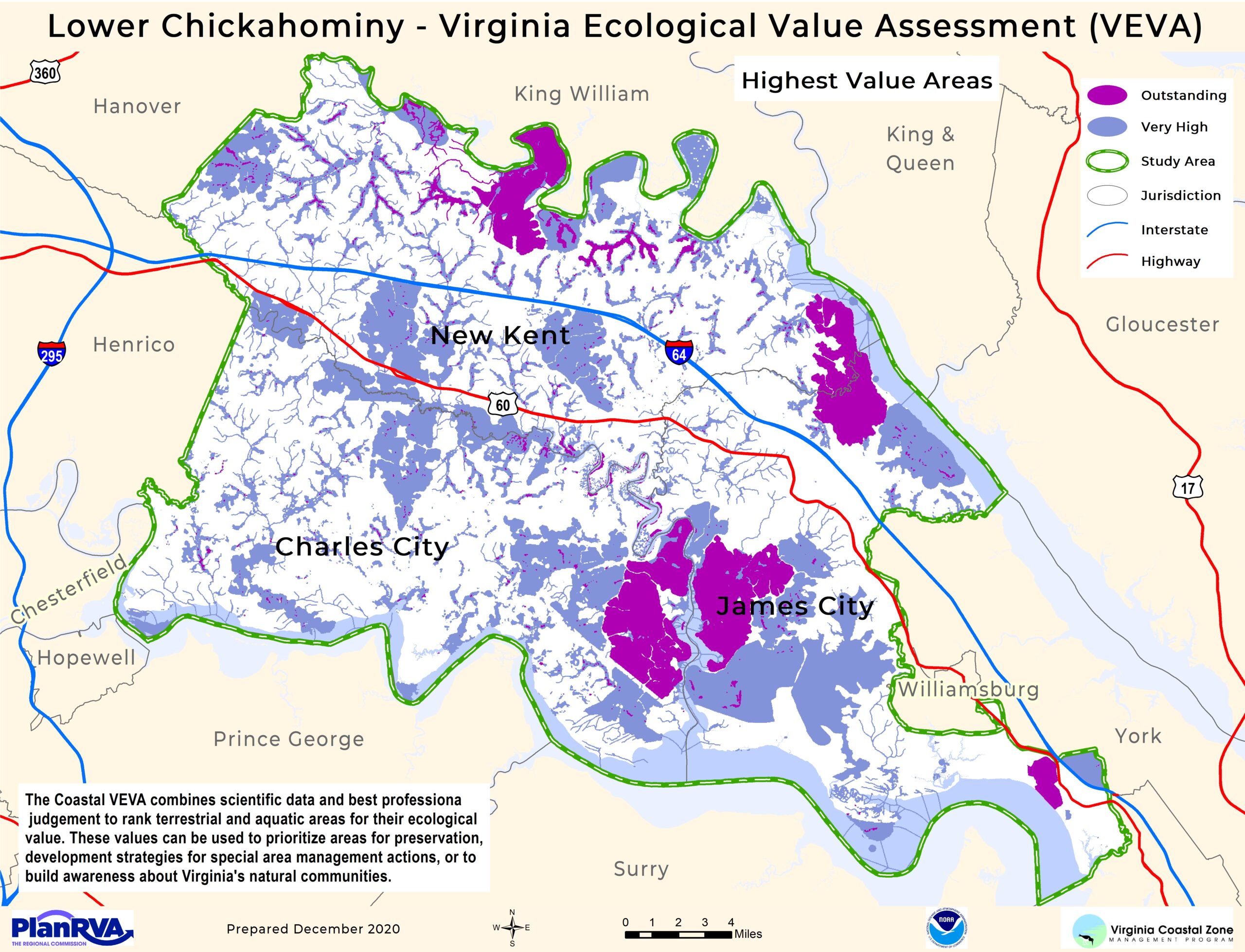 Many rare species of plants and animals call the Lower Chickahominy home.  During the first year of this project, funding was provided to the Virginia Departments of Conservation and Recreation Division of Natural Heritage, Game and Inland Fisheries, and Environmental Quality to update species and natural communities data.  Much of the data gathered by state resource agency staff is sensitive and not publicly accessible in detail since it describes the location of rare and endangered species.   In the three counties of the Lower Chickahominy area, there are species of global, national, and state significance due to the threat of endangerment.  Below you will find a few highlights from cataloged species data in the study area.

One report developed as part of the data update during the first year of the project is publicly available and can be downloaded here:

Inventory for Important Biological Resources in the Chickahominy River Watershed

If you would like to learn more about wildlife in Lower Chickahominy and across Virginia, see:

Rare Species of Plants & Animals of the Lower Chickahominy 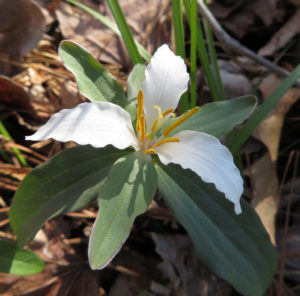 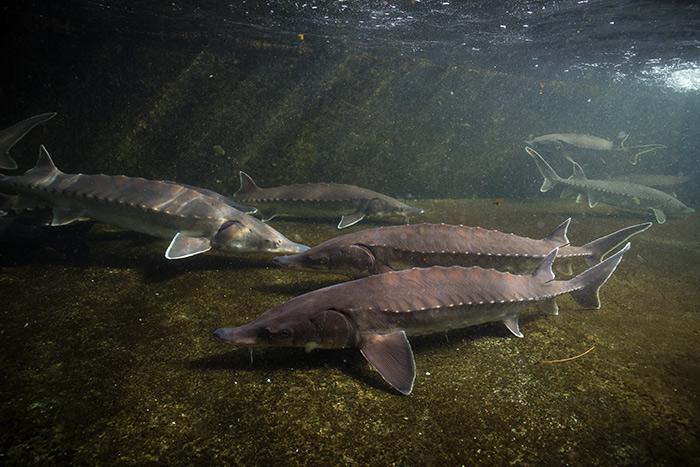 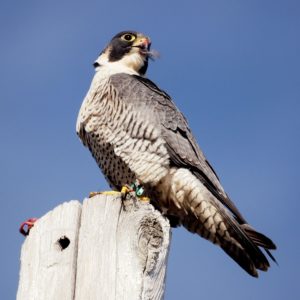 by this is for the birds is licensed under CC BY-NC-ND 2.0 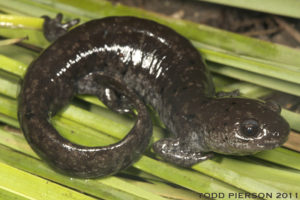 by Todd W Pierson is licensed under CC BY-NC-SA 2.0

This project, Task # 93.01 was funded by the Virginia Coastal Zone Management Program led by the Virginia Department of Environmental Quality through Grant FY18 #NA18NOS4190152 of the US Department of Commerce, National Oceanic, and Atmospheric Administration, under the Coastal Zone Management Act of 1972, as amended.  The views expressed herein are those of the authors and do not necessarily reflect the views of the US Department of Commerce, NOAA, or any of its sub-agencies.